Our U19s beat MTK in Budapest, 1-2 with goals from John and Németh helping us to victory.

Our U19 side was headed to Budapest, the capital of Hungary. In action in the first leg of the UEFA Youth League, they were set to face MTK, a tough opponent. Despite being behind at the half, our youngsters managed to return to Genk with a 1-2 victory, delivering a strong performance that leaves them one step closer to the next round.

Our youngsters started the match with confidence, having been invincible for weeks. In the national youth league competition, they still have the maximum of points, while in Europe they have already easily bested 1. FC Köln. Yet they started the game hesitantly in Budapest. Jay-Dee Geusens hit the bar but otherwise there was little pace to their play, and few chances. That was the case for both teams, however, before MTK came alive some thirty minutes into the match, the Hungarians having some good chances. Despite this threat, Vic Chambaere distinguished himself with some much-needed saves until just before halftime the hosts took the lead after a nice counterattack and finish, 1-0.

Things had to be executed better, and that’s just what happened — a completely different KRC Genk came out of the dressing room in the second half. We played with lots of high pressure, quick ball movement and were technically clearly superior to the opponent. That did not, however, immediately result in a goal, but around the hour mark things suddenly changed very quickly. Our team turned the match completely around in about five minutes: first András Németh – born in Budapest – finished well off from Abid and then Kelvin John completed a wonderful attack, giving us the lead, 1-2! After that, our side kept the match under control; MTK had a few more chances, but we would also came close to scoring.

The final whistle blew, leaving us with a 1-2 win. It was an important victory looking ahead to the return match in Genk, to be held on Tuesday 23 November at 6 pm. Be sure to come along and encourage our youngsters on to the next round!

About the UEFA Youth League

As national youth champions, we started in the so-called Domestic Champions Path. This part of the draw includes the 32 highest-ranked national champions whose first team isn’t in the group stage of the UEFA Champions League. These 32 teams will play in two knockout rounds for eight places in the play-off round. At stake in this double-legged tie against MTK Budapest is a place in the Round of 16, where the winner of this tie will face one of the second-placed sides from the Champions League group stage. 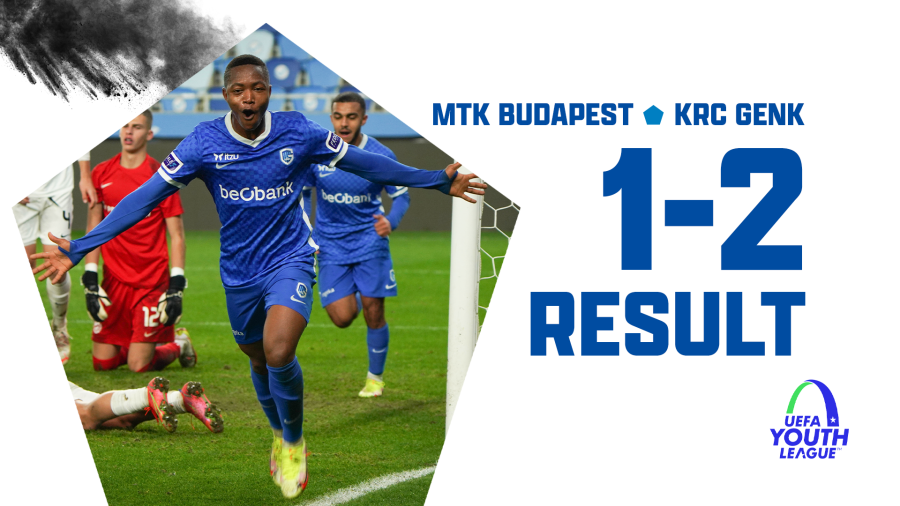